Emperor of the French

Napoléon Bonaparte (/nəˈpoʊliən, -ˈpoʊljən/; French: [napɔleɔ̃ bɔnapaʁt], born Napoleone di Buonaparte; August 15th, 1769 – May 5th, 1821) was a French military and political leader who rose to prominence during the French Revolution and its associated wars. As Napoleon I, he was Emperor of the French from 1804 until 1814, and again in 1815 during the Hundred Days.

Napoleon dominated European affairs for nearly two decades while leading France against a series of coalitions in the Revolutionary Wars and the Napoleonic Wars. He won the large majority of his 60 major battles and seized control of most of continental Europe before his ultimate and final defeat at the Battle of Waterloo in 1815. He attempted to escape to the United States of America, but these efforts were unsuccessful. He would surrender himself to the British, and was exiled to Saint Helena, where he died six years later of Stomach Cancer.

The ancestors of Napoleon descended from minor Italian nobility of Tuscan origin who had come to Corsica from Liguria in the 16th century. Napoleon boasted of his Italian heritage, saying: "I am of the race that founds empires", and he referred to himself as "more Italian or Tuscan than Corsican".

His parents, Carlo Maria di Buonaparte and Maria Letizia Ramolino maintained an ancestral home called "Casa Buonaparte" in Ajaccio. Napoleon was born there on 15 August 1769, their fourth child and third son. A boy and girl were born first but died in infancy. He had an elder brother, Joseph, and younger siblings Lucien, Elisa, Louis, Pauline, Caroline, and Jérôme. Napoleon was baptised as a Catholic. Although he was born Napoleone di Buonaparte, he changed his name to Napoléon Bonaparte when he was 27 in 1796 upon his first marriage.

Napoleon was born the same year the Republic of Genoa, a former commune of Italy, had transferred Corsica to France. The state sold sovereign rights a year before his birth in 1768, and the island was conquered by France during the year of his birth and formally incorporated as a province in 1770, after 500 years under Genoese rule and 14 years of independence.

Napoleon's parents fought against the French to maintain independence even when Maria was pregnant with him. His father was an attorney who went on to be named Corsica's representative to the court of Louis XVI in 1777.

The dominant influence of Napoleon's childhood was his mother, whose firm discipline restrained a rambunctious child. Later in life Napoleon stated, "The future destiny of the child is always the work of the mother."

Napoleon's maternal grandmother had married into the Swiss Fesch family in her second marriage, and Napoleon's uncle, the cardinal Joseph Fesch, would fulfill a role as protector of the Bonaparte family for some years. Napoleon's noble, moderately affluent background afforded him greater opportunities to study than were available to a typical Corsican of the time.

When he turned 9 years old, he moved to the French mainland and enrolled at a religious school in Autun in January 1779. In May, he transferred with a scholarship to a military academy at Brienne-le-Château. In his youth he was an outspoken Corsican nationalist and supported the state's independence from France. Like many Corsicans, Napoleon spoke and read Corsican (as his mother tongue) and Italian (as the official language of Corsica). He began learning French in school at around age 10. Although he became fluent in French, he spoke with a distinctive Corsican accent and never learned how to spell French correctly. He was, however, not an isolated case, as it was estimated in 1790 that fewer than 3 million people, out of France's population of 28 million, were able to speak standard French, and those who could write it were even fewer.

Napoleon was routinely bullied by his peers for his accent, birthplace, short stature, mannerisms and inability to speak French quickly. Bonaparte became reserved and melancholy applying himself to reading. An examiner observed that Napoleon "has always been distinguished for his application in mathematics. He is fairly well acquainted with history and geography ... This boy would make an excellent sailor". In early adulthood, he briefly intended to become a writer; he authored a history of Corsica and a romantic novella.

On completion of his studies at Brienne in 1784, Napoleon was admitted to the École Militaire in Paris. He trained to become an artillery officer and, when his father's death in 1785 reduced his income, was forced to complete the two-year course in one year. He was the first Corsican to graduate from the École Militaire. He was examined by the famed scientist Pierre-Simon Laplace. 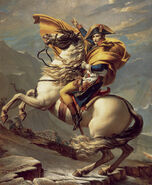 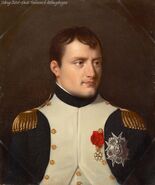 Napoleon Bonaparte on his Imperial throne, by Jean-Auguste-Dominique Ingres.

Napoleon Bonaparte in his study at the Tuileries Palace, by Jacques Louis David.

A statue of Napoleon at Les Invalides. His hand in waistcoat pose can be seen.

Napoleon on his horse Marengo pointing at something. Painting is by Joseph Chabord.
Add a photo to this gallery
Retrieved from "https://real-life-heroes.fandom.com/wiki/Napoleon_Bonaparte?oldid=19295"
Community content is available under CC-BY-SA unless otherwise noted.